Stockholm Precision Tools is proud to announce that the SPT North-Seeking Gyroscope Survey instrument made a great contribution to the industry and society on August 22nd 2010. It made it possible to find miners alive after 17 days trapped underground at a Chilean mine near the northern city of Copiapó.

On August 5th an area blocking the mine escape route collapsed and 33 miners were trapped nearly
700m underground inside San Jose gold and copper mine. Under this extreme circumstances, being
able to obtain the real azimuth (bore hole direction) is of the uttermost importance, that is why SPT
North-Seeking Gyro was used in the survey operations, which successfully helped the mine and rescue
team to fast and effectively locate the surviving miners.

Technically, a gyroscope is a device that can measure angular velocity

Felipe Matthews Rojas, manager of our customer company Geoatacama Consultores Ltda, involved in the survey operations in Chile, remarked: “Had not been for the exceptional precision of SPT equipment, it would have been impossible to end the 33 trapped miners”. The certainty that SPT equipment will deliver timely and precise downhole survey data under the most adverse circumstances is the reason why many mines around the world trust Stockholm Precision Tools North Seeking Gyroscope.

Geoatacama Consultores Ltda. accomplished the following milestones, thanks to the use of SPT North-Seeking Gyroscope Survey tool in August, 2010 at San José mine, in Chile:

Thursday, 12th: Geoatacama is contacted by Chile’s Ministry of Mining, and is granted the permission to perform the borehole orientation surveying operations at San José mine, seven days after the collapse of the mine, which trapped 33 miners underground.

Friday, 13th: At 8:00 a.m., Geoatacama begins to collect borehole orientation survey data, together with some other companies.

Saturday, 14th: Chilean Rescue Team establishes Geoatacama as the official company to lead the borehole orientation survey operations, due to the proven precision and accuracy of SPT equipment.

Sunday, 15th: After a quality control check of GyroTracer™ performed on site, a rescue team
surveyor verified the correct functioning of the instrument, which showed a 353.3044 degrees azimuth and inclination of 33.7097degrees.

Sunday, 22nd: At 6:00 a.m. the targeted tunnel where the miners were expected to be held up was successfully intersected by a probe, based on borehole 10 B orientation survey data at a measurement depth of 688 m, collected by Geoatacama with GyroTracer™.

Monday, 23nd: At 18:30 p.m. the tunnel was finally drilled at a depth of 675 m, based on borehole 16 orientation survey data, previously collected at 14:00 p.m. at a measurement depth of 660. According to Geoatacama, the intensive use of SPT equipment and quality control checks performed daily after measurements of up to 11.000 meters proved that GyroTracer™ delivers durability in extreme conditions and precise repeatable accuracy in deep and highly deviated holes, saving precious time in cases such as rescue operations, which makes it the most reliable downhole survey instrument in the market.

“We are all 33 well in the shelter”, this is what the message said written in red, solid letters in a notebook. The buried miners managed to also hit a metal bar as a sign for the rescuers.

The oldest miner, Mario Gomez, aged 65, sent also a letter to his wife explaining how they felt when the sounding lines where near to locate them. He also explained in the letter that they had water coming down from a gutter through the roof of the shelter.

It was a pleasure for us to help them in this operation and to see that thanks to the precision and technology of our GyroTracer™ we were able to expose that message written by letter that gave rest and hope to many families, and also to everyone that was waiting anxiously next to their televisions for any possible news.

They were able to hold with elastic bands in a metal bar of the GyroTracer™ on the 22nd of August the message that said to everyone: “We are safe”… That moment was poignant for us. We have never felt so satisfied and proud of our work. It was comforting.

In response, an immense happiness surrounded the region of Atacama filling up the streets of Santiago, the capital. This was taken by cars honking their horns on their path and also flags of Chile hanging out of the windows, while the national hymn was sung by adults and children. 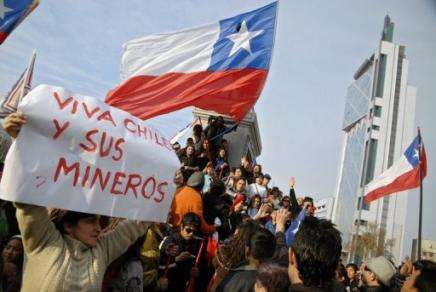