Raising an 82,000-tonne Iraqi tanker from the ocean floor

On the afternoon of January 23, 1991, the Amuriyah, an 82,000-tonne Iraqi oil tanker sunk near Bubiyan Island off the coast of Iraq during Operation Desert Storm. In 2014 it was decided the tanker needed to be removed because it was within the tanker turning circle of a proposed mooring point at Iraq’s Al Basrah Oil Terminal, through which 97% of Iraq’s crude oil is exported.

To remove the tanker, the 285-metre long hull needed to be cut up into manageable pieces.
It was clear to the general contractor Mammoet, traditional techniques for positioning cutting chains would limit the accuracy and lead to deviations in the section weights. In order to control the deviation of the pilots and ensure 100 percent accuracy, Mammoet conducted a worldwide search for technology that would guarantee pinpoint accuracy for the river cross drilling entry and exit points under the 44.2-metre wide hull.

After an extensive international search, Stockholm Precision Tools’ (SPT) North Seeking GyroTracer™ Directional was selected. SPT’s North Seeking Gyro proved to be the only proven tool in the world that could guarantee the accuracy and speed necessary to complete the complicated river cross drilling needed for this salvage operation. River cross drilling is a steerable, trenchless drilling method. It’s often used for installing pipes, conduits, and cables in a shallow arch along a prescribed bore path using a drill rig, with minimal impact on the surrounding area.

There were many compelling reasons for Mammoet to select the GyroTracer™ Directional North Seeking Gyro, but the biggest requirement was that it had been extensively field tested and had proven its ability to ensure drill hole accuracy.

Most drill contractors rely on drill hole survey instruments to make sure the drill hole is as accurate as possible. Recently, more contractors are turning to Continuous North Seeking Gyro technology because of its ability to accurately measure angular velocity in real time. The gyro surveys the wellbore in continuous mode, or real-time, at very rapid speed while simultaneously sending data to the operator on the surface, resulting in complete accuracy.

Unlike traditional survey systems which rely on stationary vibrating technology, the Continuous North Seeking Gyro relies on a rotating structure which is 100 times more accurate. Additionally, a North Seeking Gyro doesn’t need to know the starting azimuth or reference point because it is designed to find True North, as opposed to magnetic north, which can shift geographical position over time. The Gyro does this by identifying the earth spin axis from measurements of the angular velocity of the earth’s rotation. Therefore the tool only requires the latitude at which it is being operated. The benefit is each and every individual survey point is measured independently and seeks True North with complete accuracy. The North Seeking Gyro is not affected by magnetic interference and can run inside a casing or in a magnetically disturbed environment and still provide accurate data. This proved to be an advantage in raising the Amuriyah as the wreck was highly magnetic.

Most importantly, the Gyro is guided in real time and surveys the borehole at speeds of up to 150m/min while simultaneously sending data to the operator on the surface. This contributes to the accuracy of both horizontal and vertical well profiles and helps to ensure there is no degradation in the drill-hole accuracy.

Mammoet is internationally recognized for environmental stewardship, and in keeping with this highly regarded principle, it was a priority that all the river cross drilling would have a minimal impact on the marine environment. Given the accuracy of the GyroTracer™ Directional and the ability to work in real time, there was a single an entry and exit point with no other significant impact of the surrounding environment. Most importantly, the drill holes were precise, so only drilled once, with minimal disturbance. This is especially important in sensitive and bio-diverse environments.

The GyroTracer™ Directional was attached to a modified horizontal directional drilling rig, placed on a tailor-made stinger beam and fitted alongside a barge. The stinger was then submerged at an angle of 22.5 degrees until its front reached its exact designated positions on the ocean floor. At this point the drilling began.

To remove the tanker, the 285-metre long hull needed to be cut up into manageable pieces.
It was clear to the general contractor Mammoet, traditional techniques for positioning cutting chains would limit the accuracy and lead to deviations in the section weights. In order to control the deviation of the pilots and ensure 100 percent accuracy, Mammoet conducted a worldwide search for technology that would guarantee pinpoint accuracy for the river cross drilling entry and exit points under the 44.2-metre wide hull.

This successful salvage operation was the first time a GyroTracer™ Directional Continuous North Seeking Gyro was used in river cross drilling. The accuracy proved to be unmatched by any other navigational tool because other tools could not work within the 1-metre margin of error the project required.

With the accuracy provided by the GyroTracer™ Directional, nine river crossing drill holes were completed. Once the drill bit resurfaced precisely where it had been intended, the cutting chains were run through the pilot holes. When the chains were in place, the oil tanker was then cut into sections. GyroTracer™ Directional Continuous North Seeking Gyro was the only way to accurately run the cutting chains under the 44.2-metre hull of the tanker.

The job was done with absolute precision and in record time. Both the Mammoet and the local city council expressed their appreciation to Stockholm Precision Tools because without the Amuriyah’s quick removal, the construction Al Basrah Oil Terminal would have been canceled.

What is even more apparent to the industry was the potential applications of the GyroTracer™ Directional in river cross drilling. This project demonstrated the accuracy of the technology in river cross drilling and the potential application for other industries. These include installing pipes, cables or conduits over long distances with speed, accuracy, and precision. The superior accuracy of the directional north seeking gyro is also now backed up by field comparisons data and field operator experience. 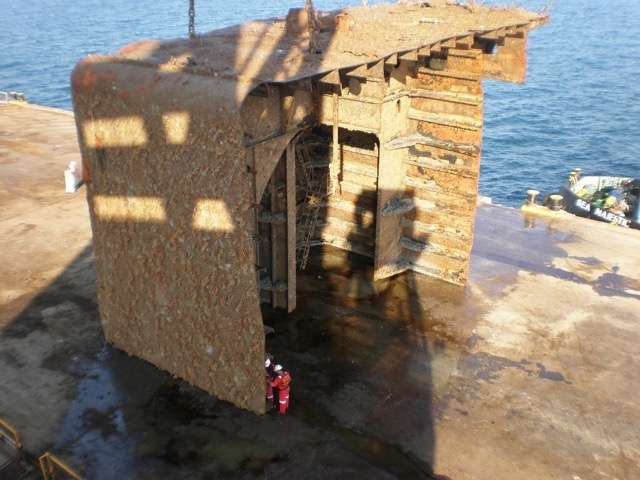